Operation: Against the Ogre Horde!

Okay so I've started working on my Ogre army.  I had started building it about 3 years ago partially as joke.  I had a bunch of old metal Ogres from the 90's (and I think some 80's) that I had initially planned on using for a Dogs of War Mercenary army.  However Games Workshop completely canned Dogs of War (Boooo) and I was left with a bunch of models and no army I could use them for.

So with a unit of old metal Golgfags Maneaters and a few others lying around I decided to add some of the other Plastic Ogres to the pile...this build up slowly took shape and eventually lead to an army idea of mixing older Metal Ogres with newer plastic to make a somewhat unique Ogre army.  My Goal now is to finish this army by the end of the year.  It's been awhile since I've had a completely painted army and I want this project to be my top priority! 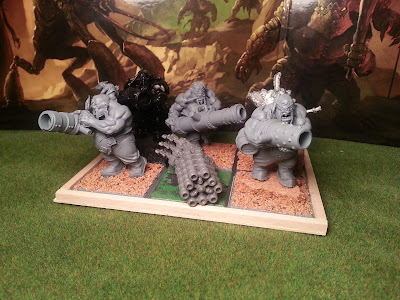 This is my main goal, complete this unit of Leadbelchers!  Now you'll notice I'm missing one, that's because I'm still looking for just the right bit to complete this unit (and, as you can imagine, that Helblaster is part of it).

-Commodus
Posted by Commodus Leitdorf at 18:40