So its been a busy summer!  I'll admit, I've been playing quite a bit of Pokemon Go (I live on a Pokestop/Gym so go me!).  I have also recently found out that Reaper is working on another Kickstarter!

I skipped the last two Kickstarters, but this one I plan on getting.  Although I have a slight problem in that I have several boxes of Dwarven Forge dungeon tiles lying around that I haven't painted yet.  So I decided to get going on that to clear off some stuff in anticipation of the new Kickstarter!  So without further ado... 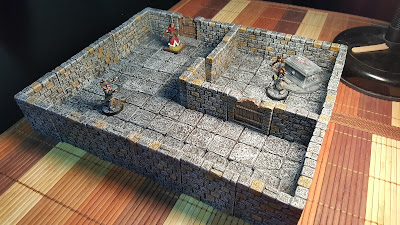 It is quick and easy to paint so I hope to get more done this weekend so I can begin working on some Bones minis to populate this dungeon.

- Commodus
Posted by Commodus Leitdorf at 04:55

Email ThisBlogThis!Share to TwitterShare to FacebookShare to Pinterest
Labels: Terrain