Battle for the Averholme: The Tale of Flick, Da Destroya O'Wurlds a 2000pt Mini Battle

So I thought I'd start off the new year with a new Battle Report!  I decided I wanted to game much more then I did last year...in which I only managed to get a handful of games.  This year it will be different however, I plan on getting games in as much as possible and trying new ones as well.

So I figured I would do a small, 2000 point battle between my Orcs and Goblins and my Ogre Khans as a way to start.  Lets take a look at the forces. (Sorry for the poor picture quality!) 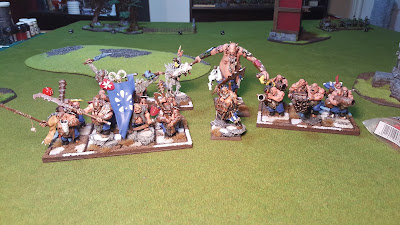 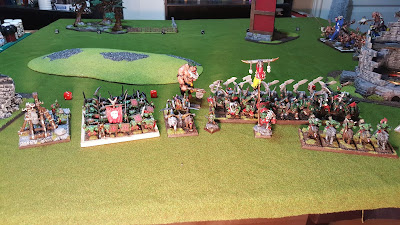 Lets take a look at the battlefield. For this game we'll be playing on a 4x4 Battlefield.  I know technically small point games should be on a slightly smaller board, but I prefer 4x4 personally.

For this fight I rolled up "Frontline clash" deployment, a good old fashioned battle!  For the secondary objective I also got Capture the Flags.  Now normally one would need 3 scoring units for this type of game.  However, due to the fact we are only playing 2000pts each side only has 2 scoring units.  So we will be limiting it to those instead. 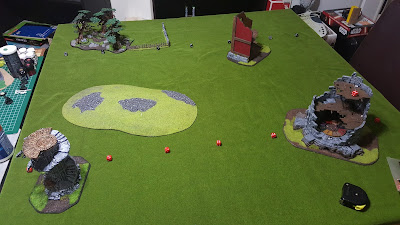 So here we have the terrain setup, with the deployment zones marked off as well.  Now neither side has any magic so I'll be skipping that step for the battle report.

Flicks forces out deploy the Ogres and elect to roll for first turn. With a +2 bonus the Orcs and Gobbos win! 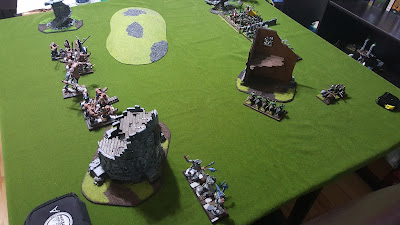 The Yetis and Goblins Raiders Vanguard move up and we off off to turn 1.

Movement
No charges this turn.  The Raiders and chariot move up slightly to be able to put arrows into the Yetis.  The Orcs move up slightly as well, wheeling around the building while the Giant marches up the threaten the Bruisers flank. 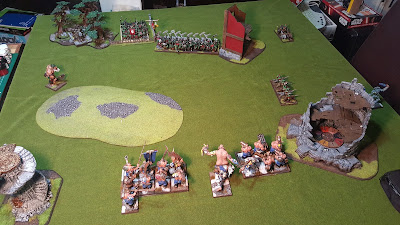 Shooting
Both the Raiders and the Chariot shoot the Yetis, neither manage any wounds.  The Catapult shoots at the Giant and, of course, Misfires on the first turn.  Causing a wound on the machine. 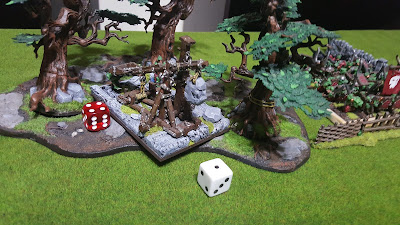 Movement
The Yetis charge the Chariot who elect to stand and shoot, but fail to do any wounds.  The Yetis manage the long charge. 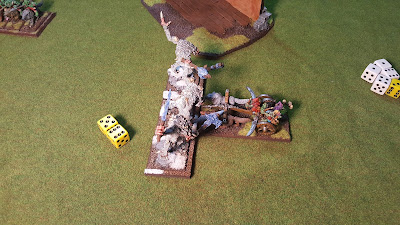 The rest of the line moves up slightly making sure they are out of Orc charge range. 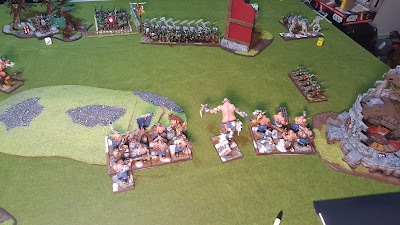 Shooting
The Bombadiers shoot at the Raiders and manage to kill 4 riders.  The last one manages to pass it's panic test. 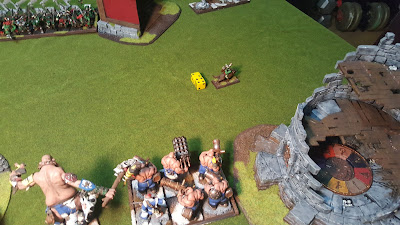 Close Combat
The Yetis attack the Wolf Chariot and manage 6 wound, killing it outright!  They decide to overrun to get behind the Orc and Goblins lines. 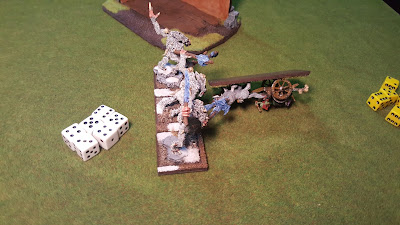 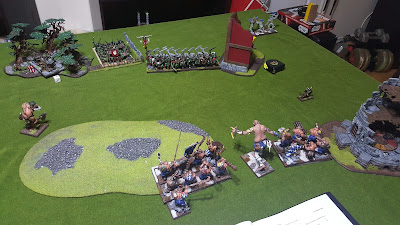 Movement
The Giant manages to charge the Bruisers, who pass their terror check. Both the 'Eadbashers and Goblins move up to threaten the Ogre battle line, but also to avoid the Yetis in the flank.  The lone Raider moves up to block the Bruisers should they manage to kill the Giant outright. 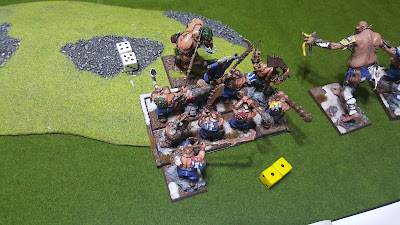 Shooting
The Catapult fires at the Ogre Slave Giant but misses.  The lone Raider fires it's bow at the Giant as well but also misses. 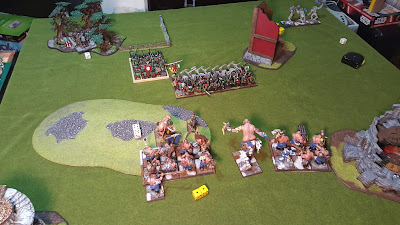 Close Combat
The Great Khan makes way and gets into combat with the Giant, hoping to make short work of him, but only manages 1 wound.  The Giant then proceeds to Bellow before the rest of the Bruisers can attack, automatically winning the combat by 2.  The Bruisers manage to hold however. 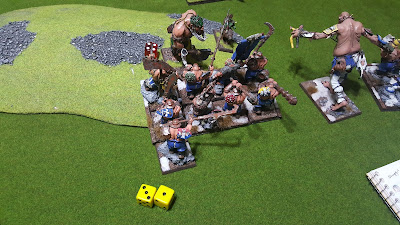 Movement
No Charges this turn. Seeing as charging 'Eadbashers might not be the best idea in the world for a solo Slave Giant.  He elects to just get up close and personal to jam them up so they cannot help out their own Giant.  The Yetis turn around the ruined building and move to threaten the flank of the Orcs and Goblins.

Shooting
The Bombadiers fire a fusillade into the Orcs and, naturally, roll terribly and only manage 3 wounds. 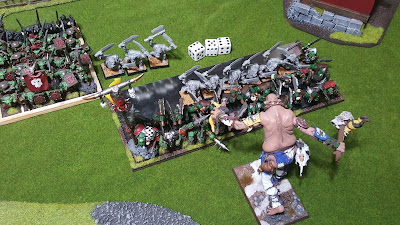 Close Combat
The Great Khan throws all of its attacks into the Giant, and manages only 1 wound...which is immediately blocked by the Giants ward save.  Go Khan!  The Giant rolls a Thump and elects to hit a regular Bruiser, which fails it's initiative test and is immediately smooshed for 3 wounds.  The rest of the Bruisers finally get a chance to attack back and cause 3 wounds themselves.  The Giants attempt to stomp fails to cause any wounds.  The Giant loses combat but passes it's break test. 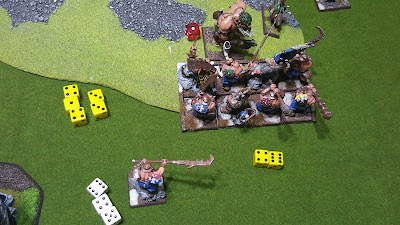 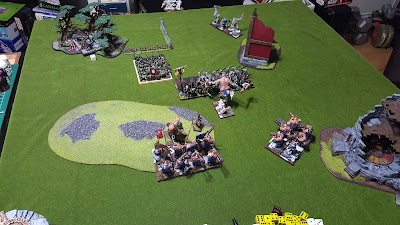 Movement
Orcs charge the Slave Giant blocking their path to try and break free and help their own Giant.  The Common Goblins lead by Flick make a swift reform and move to intercept the Yetis.  The loan Goblin Raider stays put blocking any potential Bruiser charge. 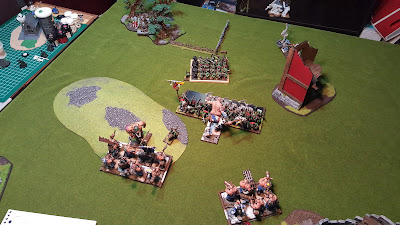 Shooting
The Goblin Splatterer shoots at the Bombadiers and manages a partial hit, causing a grand total of 1 wound.  Meanwhile the Raider fires it's bow into the Bombadiers as well to no affect.

Close Combat
The Battle Standard Bearer decides to not put himself into a position to be crushed and decides to let the rest of the boys handle it.  Hitting simultaneously, the 'Eadbashers cause a total of 7 wounds!  The Giant, after a reroll, gets the swing result and only kills 2 orcs.  The Orcs slaughter the giant in one go and Overrun 8"....but are blocked by the lone Raider.  Seems like the orcs didn't think they'd be able to kill the Slave Giant in one turn....unlike the Bruisers. 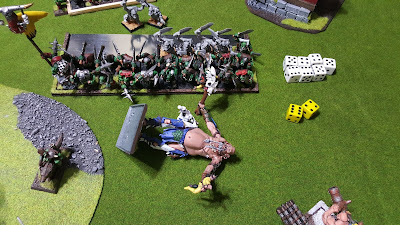 Meanwhile the Khan manages to put 2 more wounds on the Giant, killing it outright and reforming to face the Orcs. 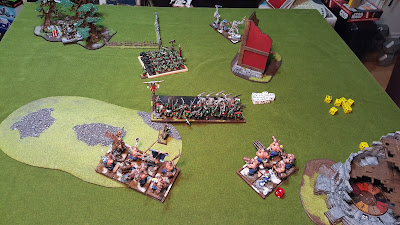 Movement
The Bruisers charge the Lone Raider.  Seeing it's life flash before it's eyes it elects to flee.  The Ogre try to redirect into the 'Eadbashers and manage to make it.  The Bombadiers charge as well looking to finish up the Orcs. 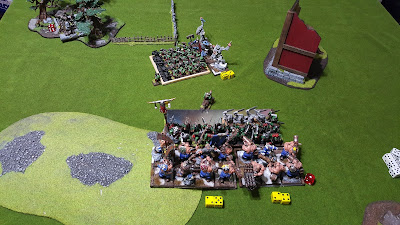 The Yetis on the far side of the board, not sure if they can reach the Orcs elect to charge the Goblins lead by Flick.

Shooting
No shooting this turn

Close Combat
The combined charge manages 5 wounds with impact hits on the Orcs.


The Great Khan Challenges the Iron Orc.  With no Champion in the unit the Iron Orc accepts and chugs his potion of swiftness.  The Iron Orc fails to cause any wounds on the Great Khan while he manages 1 wound on the Orc in return.

The rest of the Orcs attack back causing 4 wounds on the Bombadiers and 8 on the Bruisers!  Now it's time for the rest of the Ogres to strike back.  Both units lay into the 'Eadbashers and.... 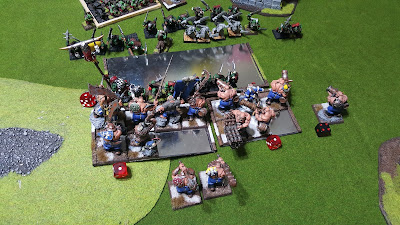 The final tally is the Ogres winning 20 to 13.  The Orcs fail their break test and flee, the Bruisers elect to pursue and the Bombadiers elect to hold....but they fail their restrain check and are forced to pursue as well.  The Bruisers fail to catch the Orcs but the unrestrained Bombadiers do manage to catch them, so I guess it was good to fail that test.  The Bruisers do manage to catch up and destroy the last Raider.  Poor guy never had a chance....

Now it look like Flicks Green Tide in on the verge of collapse...time for the boss to go to work.  The Goblins pass their fear test and the Yetis slam into the Goblins causing 8 wounds!  The Goblins themselves manage 3 wounds back and then Flick, showing why he's the Boss, causes 4 wounds back with his 4 attacks.  The Yetis lose combat and fail their Break test, the Goblins restrain and choose to reform to face the Bruisers while the Yetis only manage to flee 3". 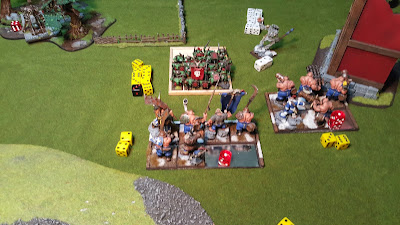 Movement
Now it is time to show these Ogre why Flick is the Destroya!  He calls the Green Tide and charges the Bruisers head on.  Flick has got to take out this unit for any chance at victory. 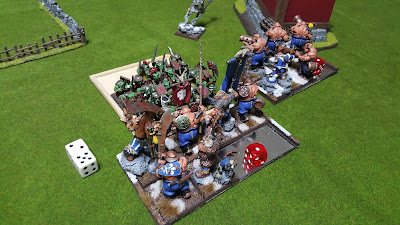 Shooting
The Splatterer takes aim at the Bombadiers and proceeds to immediately Misfire, it cannot shoot this turn or next turn.  You go Goblin engineering! 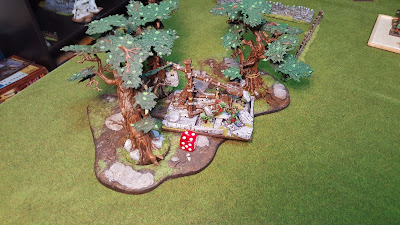 Combat
Now it's time to get work done, wasting no time (and not having a champion in the unit anyway) Flick challenges the Great Khan, The Destroya fears no one! 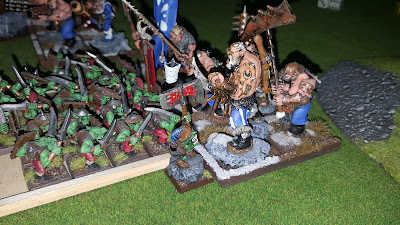 The Khan strikes first and throws everything he has into the tiny Warlord... 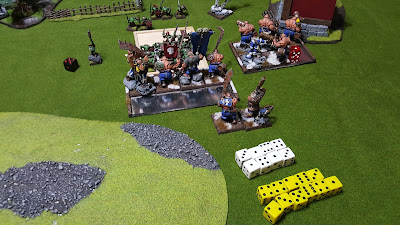 ....and immediately crushes him causing 5 wounds.   The Pan of Protection Pinching isn't all that useful when your opponent barely has an armour save himself.  The rest of the Goblins manage 4 wounds but the Ogres hit back and cause 5 more.  Without Flick leading them the Gobbos decide to exercise the better part of valour and are immediately run down by the Ogres.

With both scoring units dead and only a useless Catapult left on the field the Orcs Concede. 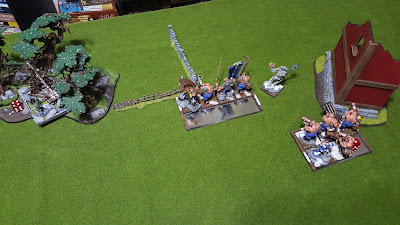 Well that was fun!  My first game in awhile and I managed to remember most of the rules...mostly.  I am hoping to get more games in with my Ogres especially as I really want to see if I can make a tournament this year.

Hope you all enjoyed it!  I'll be back soon with more projects and Battle Reports, until next time.


-Commodus
Posted by Commodus Leitdorf at 10:26