May is Here! Summer Slowdown incoming

Hello once more all,

Wow, okay, I haven't updated much in the last 3 weeks.  Mostly because I haven't painted much mostly due to being busy. Also because I've been sick the last week and a half.

But now I'm better and can post what I finished painting which isn't that much...but at least it's something! 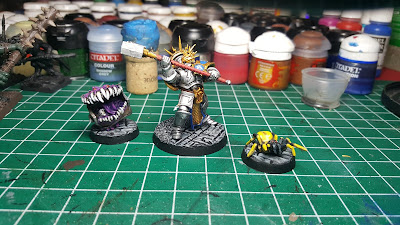 There we go!  Last minis I painted in April.  A mimic, a Spider and a Retributor for my Stormcast.  Like I said, not much but at least it's something.

So with these added to the mix I painted 14 Models this month for my 2019 model total to 74 minis to date.

So what do I plan on doing next?  Well I haven't been keeping to my promise to not buy until I paint the stuff I bought recently, and I bought a bunch of stuff recently.  So my goal is to prep and paint them up.

-Commodus
Posted by Commodus Leitdorf at 05:06