Hello once again everyone!

Well this is a later reply then I would of wanted but!  I finally have more models to show off that I finally finished painting.  So without any more long winded introductions... 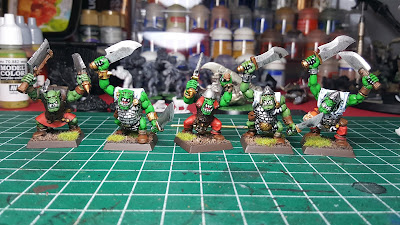 5 more Orc Boys!  First minis finished for this month.  I\m now over the half way mark for this unit of 40.  15 more to go and I finish the first unit for this Orc and Goblin army since 2014!  Then I can move on and round out my core choices...I have so many goblins...

Anyway, with that said I've been kinda bored in Quarantine, so I setup a game of AoS Skirmish just for fun! 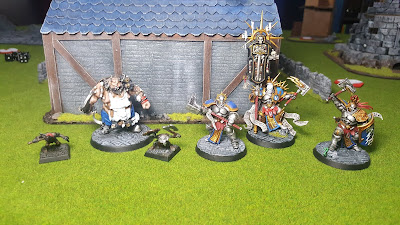 I didn't write a Battle Report but I thought I'd share a few highlights of  Ezgut the Despoiler against Galerin Forgeheart.  Following the rules for AoS Skirmish I started off the campaign with the Clash at Dawn Scenario. 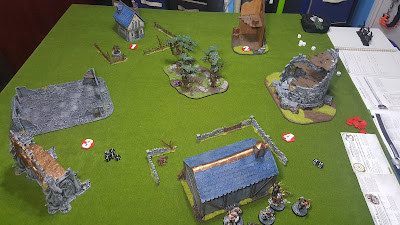 The field as divided into 4 quarters and you roll off to see where you randomly deploy (roll 5 or 6 and you get to choose). 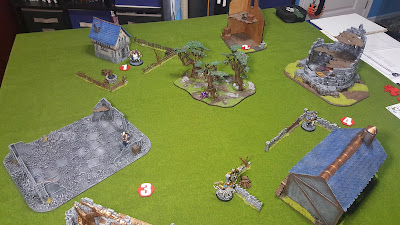 Stormcast all ended up on one half, Ogors on the other and Stormcast went first.  Rules of this scenarios say there is a limit of 12" visibility for shooting attacks in the first turn as it is too dark to see. 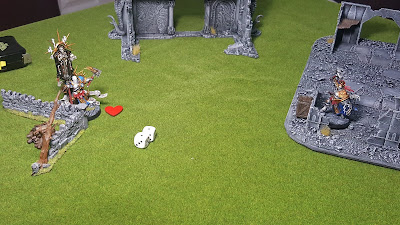 Naturally, the Lord Relictor tried to use his Cursed Tomb to cast Mystic Shield on himself and rolled double 1, so took a mortal wound and then failed to heal himself. 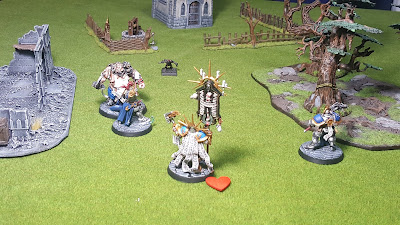 Both sides quickly made a beeline for each other, the second Gnoblar on the other half of the field struggled to get closer. 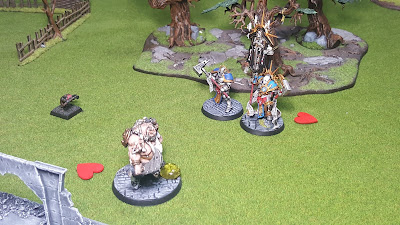 The Butcher easily took out the Liberator Prime although he got hurt in the process.  Both the Relictor and Grandhammer decided to team up to fight the Butcher. 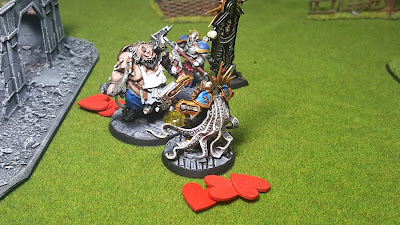 All attacks were focused on the two heroes.  First one to drop would most likely lose this scenario.  The Butchers Bloodgruel ability caused a wound on himself by rolling a 1. 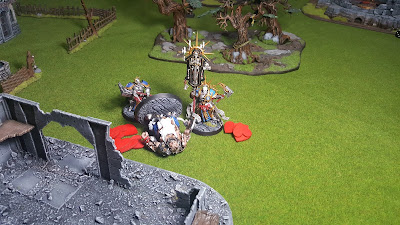 In the end the Lord Relictor managed to finish off the Butcher while only having one wound left.  The Grandhammer killed the Gnoblar with ease. 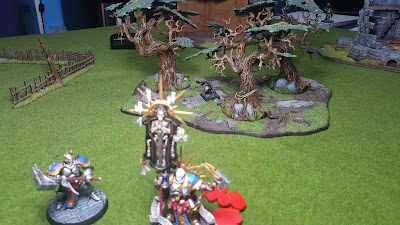 The last Gnoblar finally made its way across the field and tried to put one more wound on the Relictor but failed.  With more then half the Ogor force got at the end of the third battle round it was over.  Major Victory to the Stormcast!

That was fun but I do think Skirmish should be played without Heroes.  They are too tough and If I'm going to continue these in the future I'm going to use Unit champions as the "Heroes".

-Commodus
Posted by Commodus Leitdorf at 06:40