Against the Ogre Horde!: Update 12

Okay I actually am currently working on the Scraplauncher but I thought I'd throw up a quick WIP picture for my Ironguts so.... 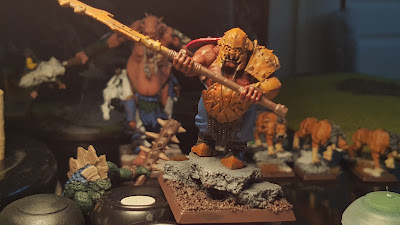 Also given that I was totally occupied over the weekend and didn't even notice it happening I thought I'd like to take this Moment to say Goodbye to the Tomb Kings as a faction in Warhammer.  The entire line went to "Last Chance to Buy" and I completely missed it until late on Sunday night.  By then the minis I would have wanted to grab were gone, and the relatively cheap ones on Ebay were gone to. 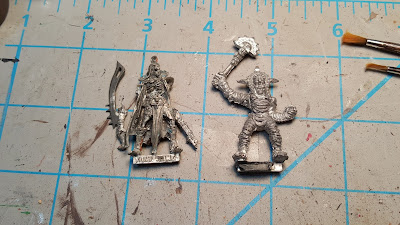 These are the only two Tomb King minis I have, the mummy is not technically Tomb Kings it was the precursor to it so...lets not get technical.  The point is I always loved the line even though I didn't play the army, so in tribute I will be painting these two and finding a way to add them to my D&D campaign so I can get some use out of them....now, at the end of all things.

-Commodus
Posted by Commodus Leitdorf at 17:12