The Breaking of the Averholme: Age of Sigmar

Okay. I haven't had an opportunity to really talk about the end of Warhammer Fantasy Battle and Age of Sigmar.  That's most because I have been trying to stay positive and not feel like I wasted a (Significant) amount of money on models I can no longer use.

Mind you this has led me to finally break whatever "loyalty" I had to GW and venture out to really check out other companies and try and incorporate them into my armies.  Mind you those are all projects I will probably only get to at a later date.  For now I'm going to focus on the Elephant in the room, Age of Sigmar!

I get why GW did what they did, Fantasy Battle was not making as much money as they would have liked and certainly was not growing.  Now I personally would have done something similar to what they did with AoS,  wreck the Old World with the End Times, but don't actually end the world.  Push the time ahead a thousand years or so, reconfigure the armies and alliances for more customization.  Make armies smaller so one box of soldiers could make a unit.  Stuff to really shake things up....mind you I would have also put together a huge 400 page tome with updated rules, all the Army Books in one large volume and called it Warhammer: The End and told all the veterans so long! (and thanks for all the fish)....but I'm not a CEO so ignore me I guess.

That being said I decided to try and put together a small AoS force using models I have lying around with no real intention of using.  So without further ado.... 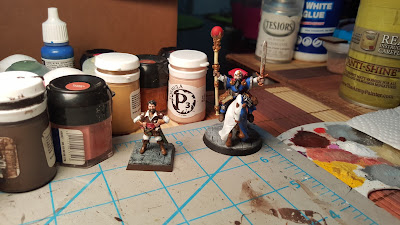 A Celestial Wizard on a horse and one Reaper Miniature for my D&D Campaign.  The plan for my AoS force is a somewhat remnant force of Free Peoples and Dwarfs living around the Averholme....

What is the Averholme?  Well stay tuned for more and find out!

-Commodus
Posted by Commodus Leitdorf at 18:15

Email ThisBlogThis!Share to TwitterShare to FacebookShare to Pinterest
Labels: Age of Sigmar