So I haven't been able to get much painted in the last two weeks and it is all my fault.  You see, as I get older I cannot seem to come to the understanding that I cannot dive and roll while playing sports as well as I could when I was younger.  I have been taught this lesson multiple times in the last few years but it never seem to stick.

So while it is healing I though I would put together a Battle Report!....or at least I planned on that. 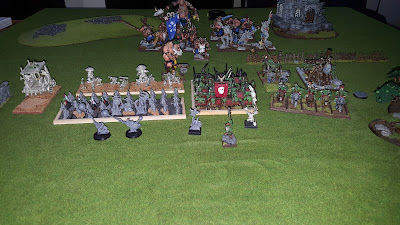 It was just a 1000 point game of 9th Age, Goblins Vs Ogres. (As can be seen above) My Goblins are only half done but they were done enough that I figured I could give them a test run against the Hard hitting Ogres.  I thought MAYBE my Ogres would get their first win as I didn't see the Goblins having much of a chance against my hard hitting Ogres. 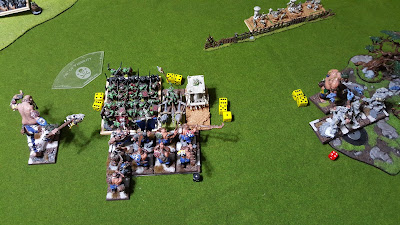 That is until the above happened.  Ogres really need to get the charge off and, as we can see, being triple charge by a Wolf Chariot, a Scrap Wagon and a block of 30 Goblins is just too much even for the Ogres.  The game was over by turn two as the Giant on the right also ran down the Yetis.

So no Battle Report this week as it would probably be the most boring battle report ever.  I hope to have a rematch soon though, so be ready for it!

In the meantime I thought I'd share something I just got in the mail: 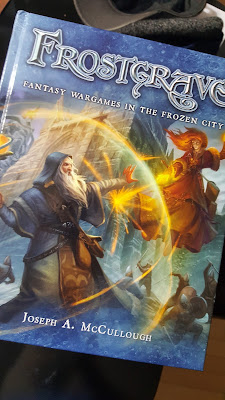 Man I can't wait to get to work on this.  I've been looking for more things to do with my Bones Miniatures and I figured I'd go through the Monster Table and paint them up for a "maybe" Frostgrave campaign in the near future (Once I finish my Terrain that is).

-Commodus
Posted by Commodus Leitdorf at 08:46