So my current D&D campaign is winding down and my gaming group is finally off to the finally.  So I better get my ass in gear and get the models painted up!

Not to get into to much detail (You don't need me to go into a lore rant about the world I created) but a fellow by the name of Ashis Golgoth, a pretty nasty Fire Giant, has gotten his hands on a Pool of Radiance.  He's using it to cause all kinds of mischief, namely tearing apart the Planes by shifting them around so the Elemental Plane of fire sits among the outer planes of the gods.

Nasty stuff....but there is a band of adventures on their way to deal with the issue....Heroes Inc! (not actually incorporated).  So I'm currently working on painting Ashis and his crew....so without further ado: 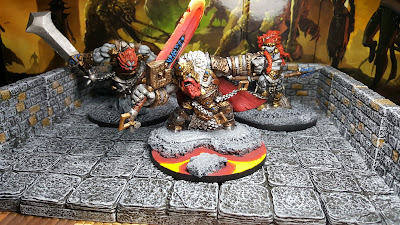 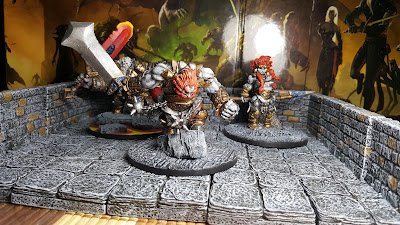 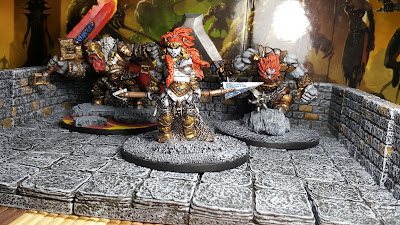 Behold my terrible picture taking!  (I need a proper picture box...must work on one).

Here they are, the final bosses of my year long D&D campaign.  Gaze upon my terrible attempt at Lava and the horrible blending on the blade.  Actually they came out better then I thought.  Which is good!  Because I have other stuff I got on my desk that I have to get done as soon as I can.  But more on that later, for now enjoy some Giants!

-Commodus
Posted by Commodus Leitdorf at 06:06