Okay so, I didn't paint as much as I would have liked last month.  I actually only, kinda, technically painted as much as I did in January (I rebased some models).  Turns out those Fire Giants were a beast to get done.

Despite my poor performance I plan on buckling down this month because I just signed up for an Age of Sigmar tournament in a little under two months (April 23rd to be exact). That means I have to buy and paint a 1125pt army in that time....go me!

So I decided to break out my Gutbusters!  I had been hoping there would be a 9th Age tournament, but that seems to have been pushed back to November.  Which is fine by me as it gives me a chance to practice more and also, maybe, finally finish rebasing my Empire army. 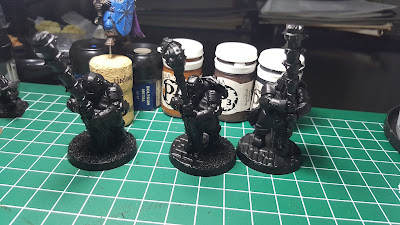 So right now my plan is to get these bad boys painted up and done by the end of the week.  I'm not sure what skin colour scheme I'm going to use so I plan on using these guys to test.

Meanwhile I sort of mentioned I had rebased some stuff for my Empire of the Sonnestahl army. 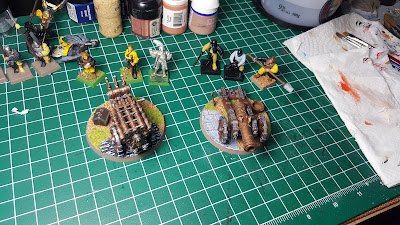 The Warmachines themselves are complete but I still have to get the crew re-painted, and in some cases stripped to begin with.

So my total count of painting models for February is....three...with two rebases.  Going to have to get in gear for this month!  My Goal is at least ten!

-Commodus
Posted by Commodus Leitdorf at 07:07