So the tournament is now complete!  Fun was had by all and although I didn't win anything (shocking), it was still a blast.  Even if it was the first time I technically have ever played Age of Sigmar.  I didn't have a chance to take as many pics as I would have liked...because I mostly forgot.  So let's take a look at the highlights!

The Ogors of the Averholme! 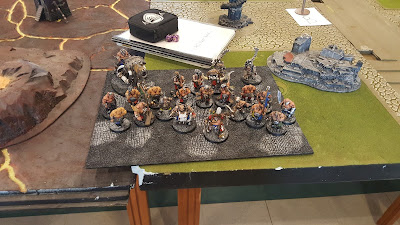 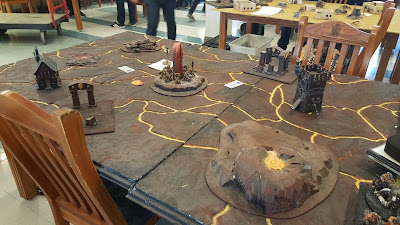 OMG!  The very first tournament I went to had this...but the group that manages the old tournaments in the city doesn't exist anymore.  Man I wish I knew who some of these gaming tables belonged too.  Every time a gaming store or club shuts down a new one pops up to grab them.  Hooray for recycling I guess, 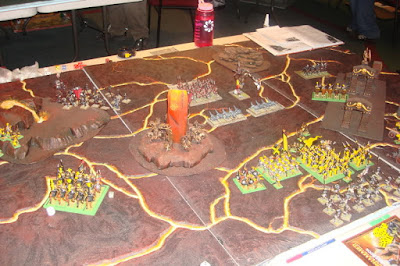 This picture was taken 10 years ago (almost) at Arena Montreal 2008.  Behold my Empire army in all it's old Green base glory! 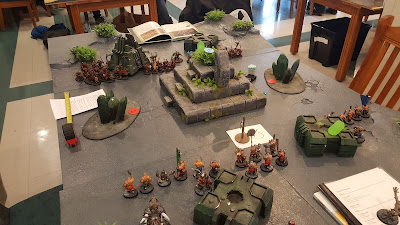 Here we have my first game EVER of AoS against Ironjaws.  He had two 10 man units of 'Ardboys, one 10 man unit and one 5 man unit of Brutes, 3 Gore grunta, a Megaboss, Warchanter and Shaman.

The objective was pretty simple, there are 3 possible ways to score in the game.  Hold one (or both) of the Red objectives, hold the Blue objective in the center with a character, or wipe out a unit in a turn.  You had to select two of the three you'd try for at the beginning of the turn and hope to get them. 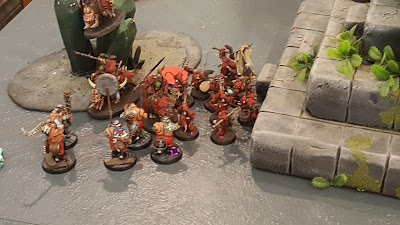 Well long story short I didn't really play the objective as hard as I should of.  I got whooped pretty bad in the end.  That doesn't mean I didn't wreck some face!  My Ironguts wiped out the 10 man unit of Brutes in one turn (my god do they hit hard), as well as the Gore Gruntas.  Sadly I just didn't have the numbers to hold off the Ironjaws who whittled me down through attrition.

So first game lost in a Massacre!  Good way to start. 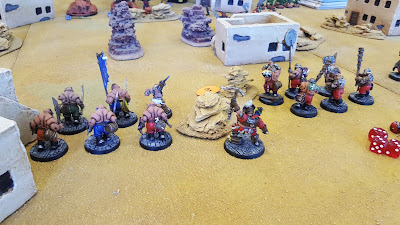 Second game was another matchup against Destruction.  He had two 10 man units of Savage Orruks, a 10 man unit of Brutes (again!  Ugg), a Warchanter, A Night Goblin Shaman as well as a Frostlord on a Stonehorn (Gulp!) and a Thundertusk.

Scenario is straight forward, basically Gifts from heaven scenario from the Generals Handbook.  The Objectives each fell across from each other. 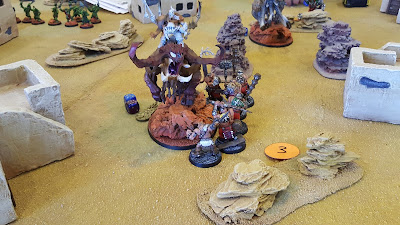 Well Frostlords are freaking DEADLY!  It killed my general and 5 of 6 Ogors...but then my Ironguts went to work and killed the bastard while my Ironblaster took out his Thundertusk...the rest of my army did not fair so well. 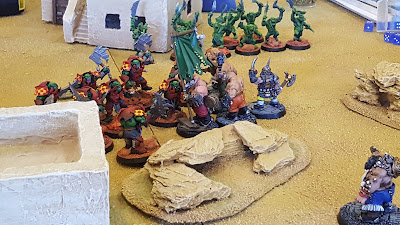 I actually managed to play the objective this time and my opponent was technically only one point ahead.  However, due to the way things were scored I still got beaten pretty badly...but I mauled him as good as he mauled me so I didn't feel too bad.  Massacre victory for my opponent...on to game 3! 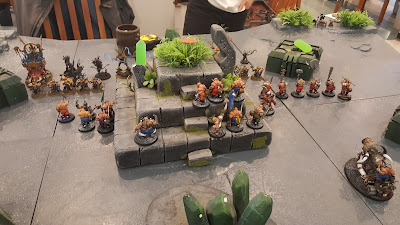 Last match I sadly did not get many pictures of.  But this match I actually got the hang of my army and went for the kill.  The objective was in the center of the board and I basically held it the whole time and wiped his army out to a man (My god Ironguts!) 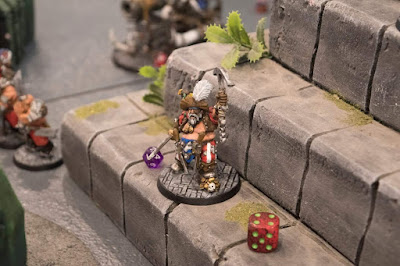 Victory to the Ogors of the Averholme.  I didn't rank anywhere useful but it was still a fun tournament.

Welp!  It was a long slog for this porject but is now officially over.  I decided to take a slight break from painting so I can get more games in and work on a few more Battle Reports!  I can't wait!  Until then, see ya!

-Commodus
Posted by Commodus Leitdorf at 06:03