Hello once gain all!

Okay so I'm feeling really unmotivated when it comes to painting minis at the moment.  I have also been watching a lot of videos about building terrain for D&D/Wargaming.  So I decided to take some of those techniques and make a new terrain piece.  I decided on something simple as a test as it's been awhile since I built anything.  In addition, I want to practice doing more stuff using Polystyrene insulation foam.

To keep it simple I will be doing a rocky hill for use in 9th Age/AoS/D&D as I see fit.  The following will be a step by step on how I made this terrain piece!


Step 1: Building a Base 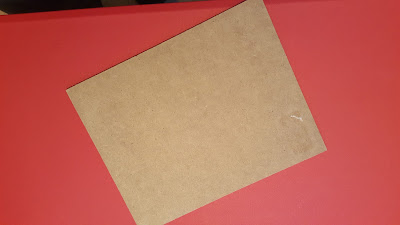 I generally like to have a base on my terrain pieces and I like to use Masonite as my material of choice.  Mostly because it is sturdy, but also because it is relatively cheap at my local art store.  Some people like to use MDF board which is easier to work with and pretty solid as well.  Other use Foamcore but I find it too flimsy for a base.  The wear and tear on it will just lead to more work in the future to fix it. 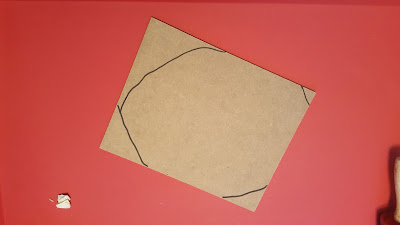 I roughly decided on the shape I was going for.  As it was going to be a rocky hill I put a few random marks along the edges as a guide for when I cut it.  Masonite is pretty tough (Unlike MDF) and is annoying as hell to cut for someone who doesn't have a proper workbench.  But I've done this several times for my terrain so I have a system involving a hacksaw and a lot of swearing. 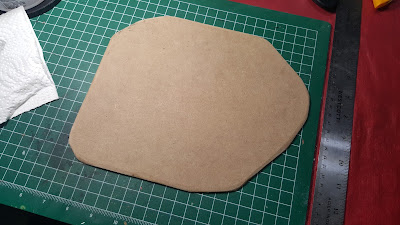 I hacked off along the lines and took a hand sander and smoothed up the edges and corners so it looks more roundish.  I also did a quick once over with the sander on the surface.  Adding grit to the smooth surface makes glue stick better. 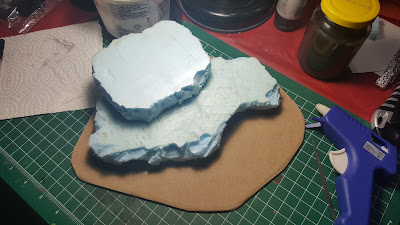 I had a few spare, irregular pieces of foam that I had lying around.  After taking a box cutter to the sides and shaving it down I then picked at it a bit with my fingers to make holes and irregular surfaces along the sides.   Then took a file and went to town on the edges to smooth them out.

Then it was just a matter of deciding how to stack then.  I wanted to make sure there was enough space for a warmachines on either level.  In addition I wanted to make sure each "step" was large enough for AoS models to move up and down on it.  Once I got it the way I liked I used my hot glue gun to put it in place. 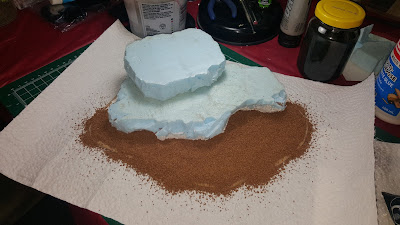 Before I went to town on this I wanted to clean up any gaps between the Masonite and the foam.  For that I just put some Spackle along the bottom.  This helped to seal it in and gave a nice lip for me to glue the rocks to the base.

Then I just smothered the base in white glue and dumped sand on to it.  I let it sit for longer then was probably needed but I wanted to ensure minimal gaps on the rocky surface.  As well as making as few rocks fell off as possible. 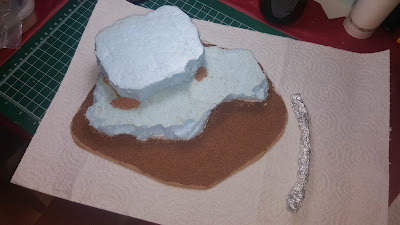 At this point I wanted to make sure this hill looked like a rocky outcropping.  I added larger rocks all along the sides of the hill to represent pieces of the hill crumbling down (hence the spackle for better surface area to glue on).  I also added a few patches of sand on the top of the hill too.

Once that was done the final step was weathering the stone.  I took a rolled up hunk of Tin foil and I just pounded the foam with it.  I rolled it on the smooth surface and jammed it into the sides and top to give the surface a rough look.  Once done, I was ready to seal this bad boy. 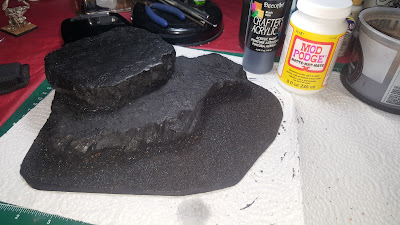 Now normally what I would do is get some white glue and thin it out with water.  Then I would paint the rocks with it to seal them in and prevent them from flaking off.  Once done drying I would just paint everything with black craft paint, or spray paint if I was working with something other then insulation foam.

That was until I discovered Mod Podge.  It's a varnish/sealer that I can mix with black craft paint easily.  Then I just paint the whole model in it and do two steps at once!  It not only seals the basing material but also seals the foam so it is less prone to damage.  Huzzah! Two birds with one stone. 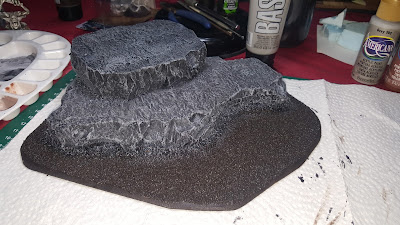 Once everything finally dried (and I had to go over it again to get the gaps I missed) it was time for the first basecoat colour.  I painted the base with a dark brown and the rocks themselves I dry brushed with a standard grey I got from a local art store. 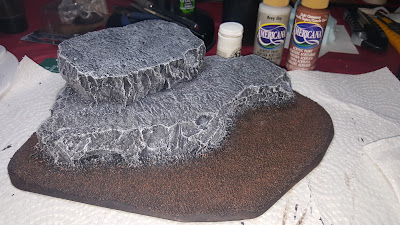 Once the basecoat was done I dry brushed light grey all over the rocks.  Then, using the same brush, I toke a tiny amount of P3 white paint and did a very light dry brush along all the edges.  I really wanted to make sure they popped.  I also made sure to get the larger rocks I had glued along the base as I wanted to show a transition between the stone and the ground.

Once the rocks were done I just gave the base a quick dry brush of light brown along with some of the large rocks close to the stone.  Once again it was to help with the transition of colours. 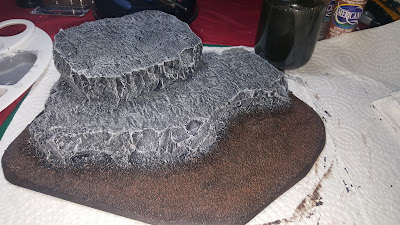 The last painting step was to give the whole thing a quick once over with my homemade terrain wash.  It's just a mix of black paint, water, and a drop of dish soap to help the wash flow better.  I probably have to muddy up my wash a bit as I didn't see much difference but it did flow into the cracks for a better contrasting colour on this terrain piece. 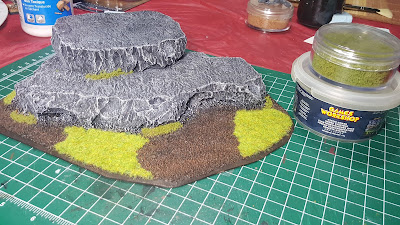 This part is pretty straight forward to anyone who's been wargaming for as long as I have.  I just slapped some white glue on the base and dumped some green grass flock all over it and left it to dry.  To help bring out the rocks more I also glued some green moss along the cracks and edges. 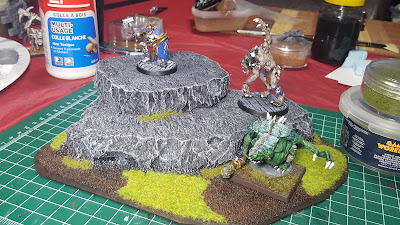 Now just to slap on some minis and take a picture for your blog!  All in all it came out well and looks far better then I thought it would.  It'll be a nice addition to my terrain collection although I will probably try for something more complex next time...perhaps even a building!

Well that's it for now for my terrain tutorial.  I guess my plan now is to give this piece of terrain a go!  I haven't played a game of Age of Sigmar since....well this time last year.  In fact I don't even have the General's Handbook 2017 yet...but I can manage with the 2016 book for scenarios and such.

-Commodus
Posted by Commodus Leitdorf at 13:17