Okay, wow.  Almost half the month gone and no update!  I mean I know it's the summer and I tend to get lazy but that is bad given my recent record of updating this blog this year.

Now I will admit I have not really painted all that much this last month.  Mostly just grabbing stuff half-painted on my desk and finishing it up.  So with that in mind lets take a look at what I managed to do for the month of July! 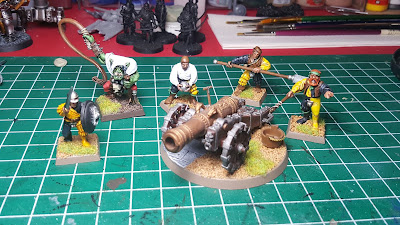 Three Cannon crew, a Swordsman and an Orc Bully!  The Cannon itself I painted...jeez years ago.  I have it somewhere on my blog but the crew have been sitting there waiting to be finished....and here they are!

Now these Empire troops all come from my old Empire army I started way back in 6th edition. In fact these minis were painted already.  As I got better at painting I realized my old stuff was...well terrible.  So I've decided to create a new 1000pt army list and re-paint/complete my Empire army fully.  So to start these crew and the lone Swordsman are my first step toward that.

Now, with that said, my Empire troops will need an opponent.  So I guess I'll have to get 1000pts of Orcs and Goblins done too.  I've had that Bully based and waiting on my desk for awhile as well so I practiced my Orc paint scheme on it and it came out good too!

These minis, along with the terrain I built earlier this month means  I have painted 7 more model for a total of 84 minis for the year 2019!

Now, with the weather still nice I'm not sure how much I will get done this month...but I'm prepping 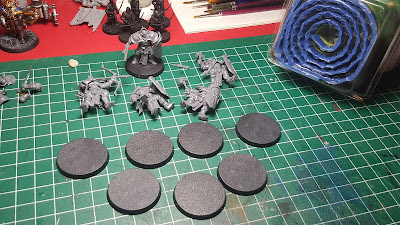 Oh I am prepping indeed!

-Commodus
Posted by Commodus Leitdorf at 14:30