So it was a slow weekend as I was fighting off a cold but I managed to get...SOME work done.  Mostly it was prepping minis so that I could later finish off.  I did manage to get a pile of stuff based, primed and painted.

So lets take a look! 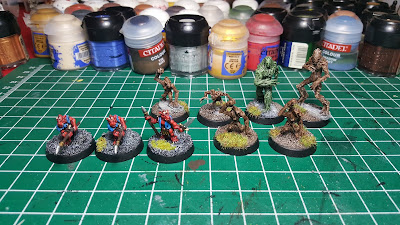 3 more Kobolds, 5 Twig Blights and a Vine Blight.  Granted the larger one is technically a Needle Blight but I intend to use him as a Twig Blight because I can damn it!

Alright with those guys done I continued my trek to get all the Bones minis I have out off my desk...but man does it turn out I have quite a few out!  I mean it is to be expected when I have 2 kickstarters worth of stuff that's been waiting to get painted since 2013.

I am making a dent however...even if it is somewhat minor.  With that said here's the next batch for this week. 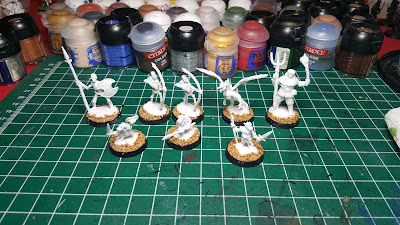 3 more Kobolds, 3 Skeleton Warriors, a small Dragon and a peasant.  Got to get most of my dungeon denizens painted and ready for some D&D action!

Posted by Commodus Leitdorf at 14:07