D&D Month: The Sunless Citadel is getting populated!

Okay, once again, slow on the update an I did not paint as much as I would have liked over the weekend.  Partially due to life getting in the way and partially due to other projects popping up that I needed to focus on.

However!  I did get some stuff painted up and finished so I figured I'd show that off, so here we go! 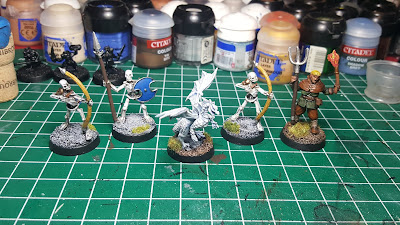 I managed to get the three skeletons, the farmer and a white dragon wyrmling Calcryx to help populate the Sunless citadel.

I would have liked to get the Kobolds done but didn't have time to start on them.  mostly because I was working on a few PC's for another short campaign I am in the middle of. 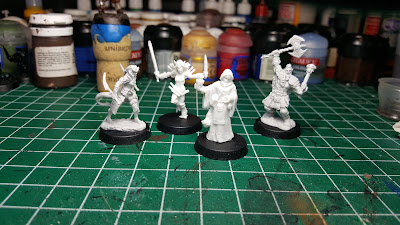 Somes bones Minis and some D&D Nolzur miniatures as I didn't have Tieflings/Half-Orcs in my Bones pile.  Just have to get them based and base coated so I can begin to work on them.

I also have a huge pile of other miniatures sitting in a semi-prepared state that I also need for multiple campaigns.  So here's to making a dent in my pile!

-Commodus
Posted by Commodus Leitdorf at 06:22