Alright so I am back with what I've been working on so far.  I didn't manage to get as much done as I would of liked but I did manage to get a few things done to show off.

So for starters I am happy to report my Conan pirates are done! 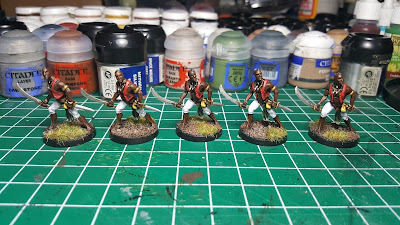 The last 5 pirates are done!  I decided to change up the paint scheme to make things interesting.  My plan on making all the pirates pants red fell apart when I realized that, in this instance, white pants would look best.

For now I decided to get another batch of models that has been sitting on my desk for the last 2 years done. 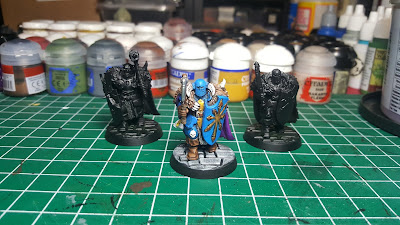 Tzeentch Chaos Warrior!  I had bought some used minis cheap in order to make a 1000pt Mortal Tzeentch army list.  I had half painted one for the last 2 years but never finished.  So now I'm...kinda finished him.

To be honest I'm not totally happy with the paint job on the armor.  I need to do more of an edge highlight but I, apparently, do not own a blue colour any lighter then whats on him and I hate mixing because I often forget my mixture and it puts the colour off.

So they are on hiatus until I can go and pick up some new paints.  While that is waiting I decided to start on these. 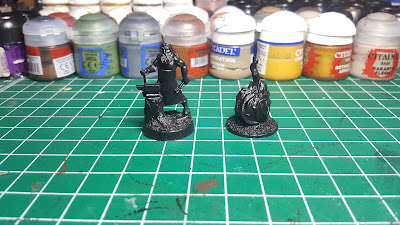 The Bones Blacksmith and a Fireball!  I already mentioned then Blacksmith in an earlier post but the Fireball I need as my current D&D character...well, lets just say the only decent spell he can cast is flaming sphere.  I figured I could use a model to represent that.

Well that's its for now!  Hopefully I'll have more done by the end of the weekend.

-Commodus
Posted by Commodus Leitdorf at 04:13